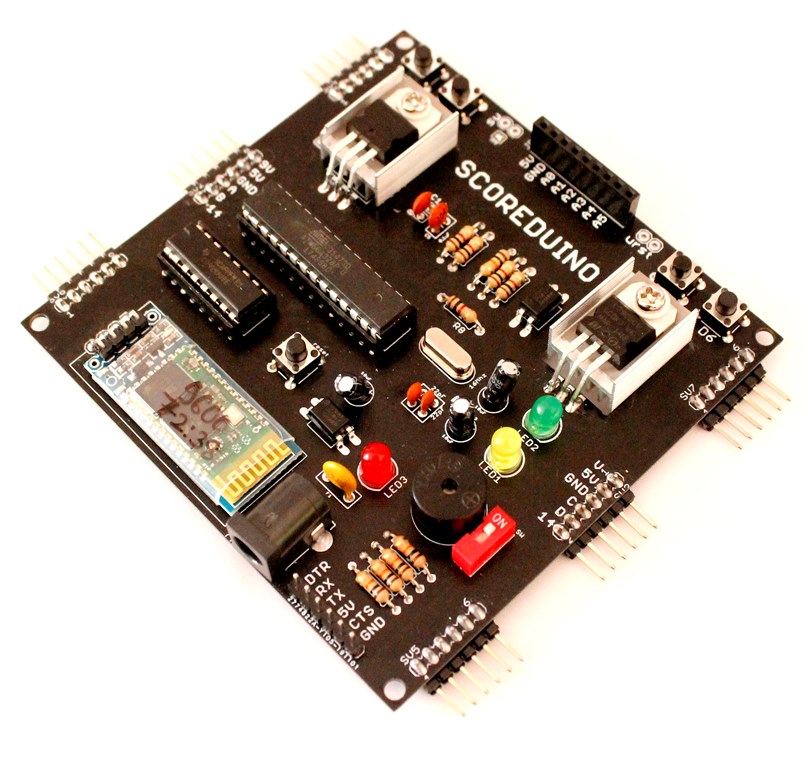 Scoreduino is an Arduino based programmable controller/device/platform dedicated to building and operating 74LS192 based scoreboards and up & down counters. It is slightly different from the regular Arduino board. It has been modified to make the Arduino compatible with 74LS192. Scoreduino based scoreboards and up & down counters can be controlled with Scoreduino app. 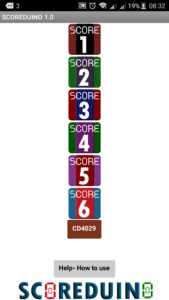 Scoreduino app is an Android based app for controlling Scoreduino based up/down counters and scoredboards. The app has altogether 7 individual apps for different scoreboards and up & down counters.

The apps have been named as: SCORE1, SCORE2, SCORE3, SCORE4, SCORE5 and SCORE6. There is one more app titled CD4029 which can be used for CD4029 based up and down counter.

The app sends up and down control signal as well as specific number to the Scoreduino device.

Scoreduino apps communicate with Scoreduino devices via Bluetooth. It has been built using MIT media lab’s App Inventor For Android.

The app is FREE and it has been released under a Creative Commons Attribution ShareAlike 3.0 license.

The ‘SCOREDUINO-A’ module works as a basic controller for up and down counters and seven segment display drivers. It has 3 switches for up, down and reset signals. Up switch increases the count and down switch decreases the count and the reset switch resets the count to zero. It works with Scoreduino app as well as RF remote control.

This is a 3 digits up and down counter based on Scoreduino or Arduino. It can be operated with Scoreduino app and RF remote control.

When operated with Scoreduino app, users can send specific number to the displays. For example, if a user send 999 from the app, the up down counter displays 999. There are two buttons to increase or decrease the count.

The ‘SCOREDUINO-B’ module works as a basic controller for two teams/players scoreboard. It has a pair of headers on side of the board that can be connected to 2 digits seven segment display drivers.

A two teams/players scoreboard has 4 digits which gets a name for its app as ‘SCORE4’. The available scoreboards have 2.3″, 3″, 4″ and 5″ displays.

This scoreboard is also a two teams/player scoreboard that has 6 digits and works with the SCORE6 module of the Scoreduino app.